UD Among the Best

In September, following standard admission procedure, 6,127 freshmen will start their studies on the Hungarian courses of the UD. After the second procedure and the entrance examination organized for people living over the border outside of Hungary, the number of students admitted may exceed 9,000.

The entry points for the courses starting this September were announced on 23 July after 8 pm, first at felvi.hu. Applicants who had provided their mobile numbers earlier received a text message late night about their results.

UD was chosen as the most preferred option by 7,990 applicants. Out of them, 6.127 (77%) gained admission to the university. This means that UD is still the second most popular university in Hungary. 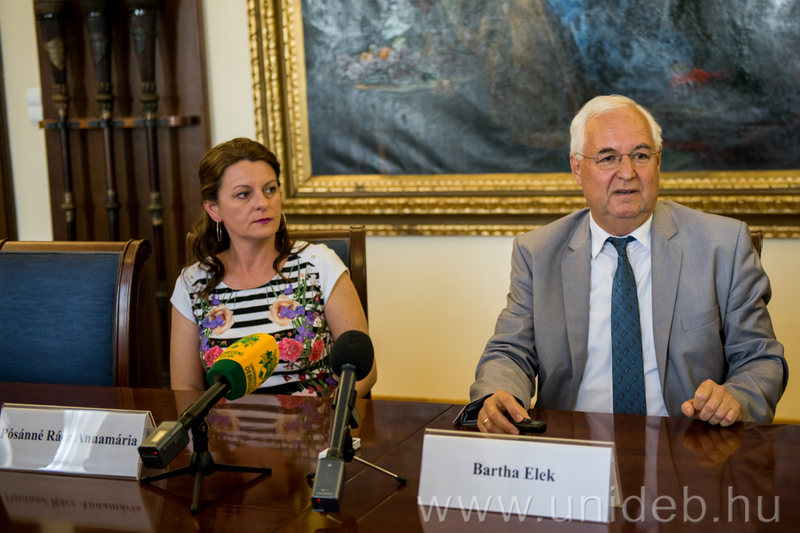 Most freshmen will start the academic year on the following courses: nursing (356), law (258), general practitioner (245). Out of the teacher-training courses, English, history, PE and applied physical education are the most popular programmes.
The distribution of first-year students by programmes: bachelor: 58%; master: 17.5%; undivided: 15%. The number of students admitted to state-financed and self-financed programmes are 5,883 and 1,267, respectively.

At the press conference held on Friday, Elek Bartha, vice rector for educational affairs said that based on the results, UD continues to be among the best Hungarian universities.

- The decrease in the number of students admitted is in line with the national trend. According to data, UD is the second most popular university in Hungary. As for the ratio of admitted applicants, we have maintained our position. The new courses have proved popular, and the number of foreign students have increased. It reflects our growing international recognition, and may also be linked to our results in international rankings – pointed out Elek Bartha.

This year, the most popular master programmes are psychology and HR consultancy, but many applied for the healthcare manager, health psychology and sport economics courses as well.

Annamária Pósánné Rácz, director for educational affairs at UD, pointed out that applicants may start a legal procedure against the Department of Education if they think that they have not been admitted to the university they wanted to, and they had enough points, within 15 days of the announcement of their result. The application should be sent to the Budapest Court of Public Administration and Labour. The director also reported on the new features regarding the second admission procedure.

- The e-admission system works well. This is reflected by the fact that hardly any students need to start a legal procedure to gain admission. There will be a major change in the second admission procedure this year, as state-financed programmes will also be available for bachelor programmes. We expect a significant increase in the number of applicants. The minister for educational affairs has defined 59 programmes that can be chosen as state-financed programmes. Of them 23 are technical courses, but agriculture, economics, IT, pedagogy, sociology, medicine and health sciences are also among the areas involved – added the director.

The students admitted will be informed about their successful entrance exam, and the time and place of registration by 8 August. Details of the second admission procedure and the related deadlines will be announced later.