UD is among the best 200 institutions

The UD has been ranked 195th on the list of institutions of higher education in emerging economies published by Times Higher Education. Ours is one of ten universities out of the 600 institutions judged that could move forward at least two categories during the course of the past year.

Times Higher Education (THE) published its rankings of institutions of higher education in emerging economies this past Tuesday, and the University of Debrecen turned out to have improved its position by moving up more than fifty notches as compared to last year’s standing, thus making it into the group of the top 200 institutions.

The most significant improvement by UD was achieved in the field of Teaching, where it scored 34.4 points (the previous year’s score was only 19.9), while in the area of International outlook, it advanced to 60.2 from the previous 55.7 points. 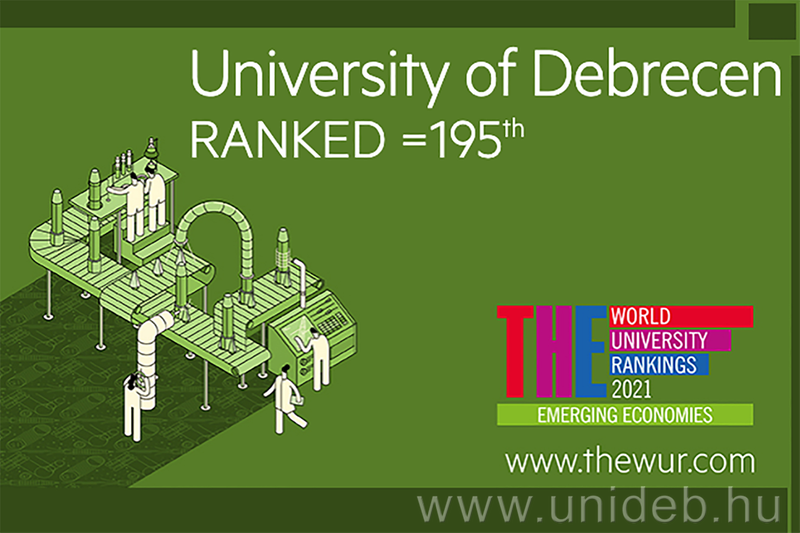 The prestigious ranking organization measured the performance of 606 universities from as many as 48 territories worldwide, which is 14% more than it had been in 2020. Out of these, 86 institutions were included in the list for the first time ever. The rankings display the increasing advancement and significance of Pakistan, China and Russia, out of which the latter two countries dominate the top 100 by occupying 47 positions each, while mainland China is the first ever country to secure all the top five positions in the rankings at the same time.

In relation to the publication of the list, THE also noted that there were ten universities this year that moved forward in the rankings by at least two categories, out of which four got into the top 200, and one of these was the University of Debrecen (which was ranked 195th).

“It is great to see that such a highly renowned organization as THE also noted and recognized the improvement in the performance of the University of Debrecen. We have been working real hard for a number of years to make sure that our institution should be ranked as favorably on these lists as possible, and it seems that all the effort and energy that we have put into this so far is going to pay off now,” said Ákos Pintér, General Vice Rector of the University of Debrecen, in his appraisal of the latest developments concerning the rankings.

To judge institutions in emerging economies, THE uses the same performance indicators as the THE World University Rankings would. However, they apply different weightings to reflect in the best possible way the development priorities of universities in emerging economies. The indicators used during the course of preparing the rankings are divided into five major areas: teaching (30%), research (30%), citations (20%), international outlook (10%), and industry income (10%).