A gas molecule that may revolutionize cancer research 22. Jun. 2022

In mid-June, upon the invitation of Section President András Perczel and Section Vice President Katalin Kövér, Professor Péter Nagy, Chairman of the Scientific and Social Advisory Board of the University of Debrecen and Scientific Director of the National Institute of Oncology, gave a lecture at the Section of Chemical Sciences of the Hungarian Academy of Sciences. This opportunity is normally available only for experts whose career path is closely monitored by the academic leadership and whose achievements in their specific fields are regarded as outstanding. 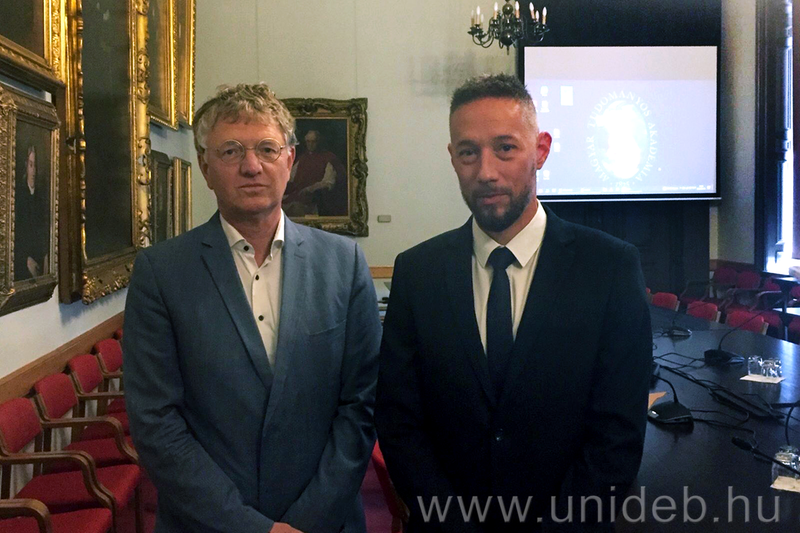 “I could participate and give a presentation at the first face-to-face section assembly following the pandemic, which is an indication of high prestige in our profession. I had a chance to present my findings in the academic research fields of redox biochemistry and biology. The main motivation of our studies is to investigate physiologically relevant oxidation processes, in which a prominent part is played by cysteine amino acid components since these protein building blocks display the highest degree of sensitivity to oxidation. The cysteine oxidation processes have a definitive role in the formation of the secondary structure of proteins as well as in the regulation of enzymes that perform important cell functions,” said Péter Nagy to hirek.unideb.hu.

Professor Nagy also underlined that, during the course of his research conducted in unison with his colleagues in the laboratory of the National Institute of Oncology, it would be exactly these processes that they explore and examine from chemical, biochemical, cellular biological and medical aspects.

Regarding his talk given at HAS, Professor Péter Nagy noted the following details: in order to be able to understand these extraordinarily complicated and diverse processes, biochemistry “needs to be tamed.” Accordingly, his research group first managed to clarify the significance of the biochemical processes under scrutiny first in the case of proteins, following which they concentrated on pointing out the importance of cysteine amino acid components inside cells and, finally, in tissues.

“We have focused on a special field of redox biology, which examines the biological features of the gas molecule called hydrogen sulfide, which is responsible for the unpleasant odor of rotten eggs. For quite a long time, only the negative toxic effects of this molecule had been identified and recorded. In high concentrations, it can cause death from respiratory failure. About twenty years ago, however, it was discovered that certain enzymes in the human body also produce this molecule specifically for regulating important physiological functions. That was the point when the study of this phenomenon was prompted, and we also decided to join in these efforts. The specific field has since grown into a research area of a fairly broad spectrum. Today, we know for certain that this gas molecule plays a crucial part in the functioning of human organs. This part is relevant in the formation of a new protein in the oxidation of cysteine species. The biological significance of this finding was described first by us and a few other international research groups practically at the same time,” said Péter Nagy.

Professor Nagy also underlined the importance of the modifications examined in the following fields: the treatment of oxidation induced cell damage, the controlling of protein activities and the regulation of signal transduction processes. Furthermore, he highlighted that, in the case of cancer progression, tumor cells also use these modifications to stimulate their own reproduction, to increase angiogenesis, to protect themselves from the immune system and to neutralize the various therapies applied against them.