Comprised of 57 Hungarian and international experts, the Scientific and Social Advisory Body was established on 14 September to support the chairman of the Count István Tisza Foundation for the University of Debrecen. The Nobel-laurate pharmacologist from the US, who is a member of the body, attended the founding even virtually. 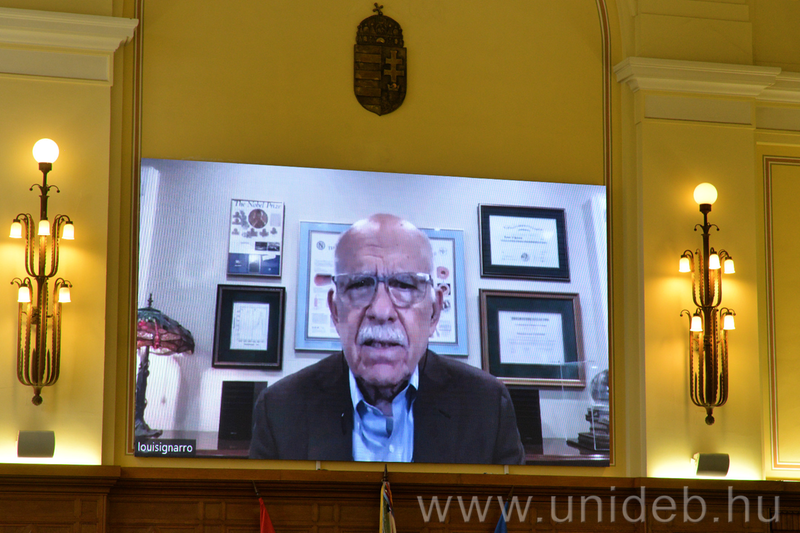 In his video message, Mr Ignarro welcomed the members of the organisation, and praised the scientific accomplishments of UD.

- It is good to see that after the change of the operational model, UD is determined to achieve success in the field of innovation. Autonomy is a crucial requirement of research and development. It also allows cooperation with organisations over the border and facilitates interdisciplinary projects. I have worked at UCLA for a long time, which is also an independent research institute – said professor Ignarro.

He highlighted that he had always been supported by the university in his research efforts.

- It is my honour to be a member of the Advisory Body, which allows me to contribute to the development of UD. The University of Debrecen has an outstanding research programme and talented researchers, and has developed a strategy that may make the institution one of the leading universities of the Central and Eastern European region – said professor Ignarro in his video message.

Louis J. Ignarro obtained his degree at the University of Minnesota in 1962, and completed his PhD studies in pharmacology in 1966. His main field of interest is the physiology of the cardio-vascular system, and he has been researching the impact of nitric-oxide on the vascular system since the late 70s. He has worked at UCLA since 1985, and he is the founder of the Nitric-Oxide Company. Along with Robert Furchgott and Ferid Murad, he was awarded the Nobel-prize in 1998 for the discovery of the signal-transferring role of nitric-oxide in the vascular system. He has dedicated his life to studying the physiology of the heart.